“And I will give you shepherds after my own heart, who will feed you with knowledge and understanding.”

Grace and peace to you from God our Father and from the Lord Jesus Christ.” 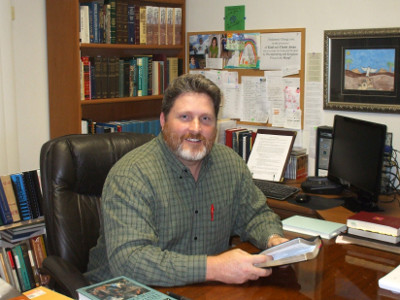 Rev. Stephen Wetmore has been married to his beloved wife, Wanson, since 1992.  He has 5 children, whom he calls “gifts from God,” David, Rebekah, Jeremiah, Josiah, and Elizabeth.

Stephen was born in Burlington, Vermont.  But from the age of 6 he grew up in Upstate NY, in the small town of Ticonderoga (famous for “the Ticonderoga pencil”).

Stephen attended college at Albany State University of NY. While there he gathered some believers together along with a local Seminary student and started Bible Awareness Group (it was in the BAG!).  They held regular bible studies, evangelized, and offered lecture series on hot topics like Women’s Issues and Homosexuality and what God’s word says about them.  This created a firestorm and protests from feminist groups and LGBA campus groups that at one point required police intervention.  From the bible study a church was founded, Cross Road’s Bible Church, in which Stephen was a charter member, officer, and Sunday school teacher.

From this church Stephen was chosen for a short term mission trip to (formerly) Kazakhstan, Russia — just prior to the collapse of the Soviet Union.  He considers this one of the most impactful times in his life; and he still has a fond affection for the people of Russia.   Upon returning to the states, he graduated from college and then married, Wanson, in 1992.

Sensing the call of God on his life, he would later move to Southern California to Study for the Ministry.  He graduated with honors from The Master’s Seminary with a Masters of Divinity degree in 1998.

After graduating, he became an interim Pastor in Lancaster California for one year.  Then the traveled to Cape Coral, Florida, intending a temporary visit with family there.  However, he soon became settled, began teaching at Providence Christian School, taught at Westminster Presbyterian Church, purchased a home, and had a fifth child, Elizabeth Grace.

He began attending Trinity Reformed Church in 2006.  He was impressed with their devotion to Christ and their integrity with the Word of God.  He began serving in the church as a Sunday school teacher and Elder.  When the pastor went into full time missionary work in 2010, Stephen stepped in as Interim Pastor.  After meeting the rigorous ministerial requirements of their denomination, he was called and ordained to be Trinity’s full-time Pastor.

“I have the privilege of telling men that God forgives sinners, and he does that through Jesus Christ!”

What are your ministry goals?

“I want to Preach the whole counsel of the Word of God.  I am determined to study carefully the scripture and explain it to God’s people.  I do not want to compromise it.  I want the people of God to reach their potential, here and now, enjoying an abundant life in Christ, and I want God to be known and acknowledged as He has revealed himself in the Scripture.”

“As a child of age 9 or 10, I sat in the back pew staring at a beady-eyed, bald-headed pastor in the pulpit.  I don’t really remember what he was saying.  It now seems a blurry dream-like memory.  In my memory his words sound more like the Charlie Brown’s teacher:  Wah, Wah, Wah . . . .  But there I was in that last pew, sincerely praying to God to let me be anything but a Pastor.  Maybe I sensed even then that God wanted me to do that (not the “Wah” part, hopefully).  God does have a sense of humor, though; now I cannot image being satisfied doing anything else but preaching the precious truths of the goodness of God in Christ Jesus.”